Trade is Crucial for U.S. Agriculture

Trade provides critical income for the U.S. agricultural sector. After a slight dip in the last year due to a strong dollar and a slowdown in China ‘s economic growth, among other factors, it looks like 2017 is the year we return to net growth in U.S. agricultural trade. According to a new report from USDA’s Economic Research Service (ERS) and Foreign Agricultural Service (FAS), “ 2017 agricultural exports are projected at $134 billion, up $1 billion from the August forecast, largely due to expected increases in dairy and livestock byproduct exports.” While the increases are not uniform across every commodity the aggregate indicates a good year for U.S. agricultural trade.

According to the report, the largest increases in demand come from China and Mexico each increasing $300 million. The report notes that “China continues to be forecast as the top market for fiscal year 2017 at $21.8 billion, followed by Canada ($21.3 billion) and Mexico ($18.3 billion).” Our initial market intelligence from the field suggests that many of our long time trade partners and some new ones will look to the U.S. in the next year for their dry bean needs. Of particular concern for all of U.S. agricultural trade is the possibility of a change in the U.S. trade relationship with China and Mexico. As noted in the report, “these two countries were the destination for an average of almost one-third of total U.S. agricultural exports from 2013-2015. USDBC will continue to push for favorable trade policies in 2017.

Over the years, Chippewa Valley Bean has developed a large export market. For the second year in a row, we’ve exported over 65% of your beans. 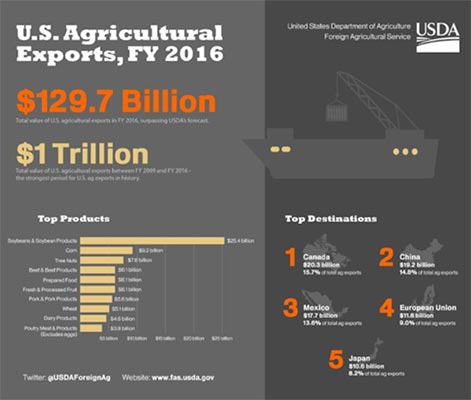